Interested in our previous 24 issues? Check out CBC's Archives here.

What’s Trust Got to Do with It?

Paraphrasing an old song by Tina Turner, what’s trust got to do with it? With climate change, that is. Trust is fundamental to us as humans: the bedrock of our engagement with others as a social species, and of working collectively towards a better future. That’s what trust has to do with climate.

Every day, we confront situations with other humans that cause us to mistrust. Last week, I received a spam call telling me that I’d purchased a certain computer recently (which I hadn’t), and to press 1 if I didn’t or 2 if I did. There was no option to delete; I had to wait until the call was over without answering, and then delete. How many people got duped by that message and pressed 1 or 2? That same day, I received numerous other spam calls pretending to originate from my city, as well as spam email messages. The end result is that I have to view every phone call, every email, every website with suspicion, as does everyone else in this country. I suspect that this daily chronic assault on trust is corrosive.

We know that trust has declined in American society. In The Spirit Level, epidemiologists Wilkinson and Pickett report that trust has fallen from 60 percent to less than 40 percent by 2004, citing the General Social Survey from the National Opinion Research Center. According to the Pew Research Center’s research in 2019, nearly 3 out of 4 Americans think that interpersonal trust has declined in the last 20 years.

We also know that trust has eroded in the United States (and Britain) over the same time period as income inequality has increased. Wilkinson and Pickett studied the effects of income inequality at two levels--societal and individual; and with two data sets--by country and by states in the United States. Random samples of the public were asked whether they agreed or disagreed with the statement, “Most people can be trusted.” The researchers showed that trust is inversely related to income inequality--areas with high income inequality had the lowest trust. While correlation doesn’t equal causation, the negative correlation between income inequality and trust was found in both data sets -- country and state. (Further, Rothstein and Uslaner (2005) used a statistical test for causality to show that inequality is a strong predictor of trust and not the other way around.) The mistrust was found in people at all income levels. At the country level, the researchers showed a six-fold difference in trust among countries. The United States had lower levels of trust than Japan, European countries, Australia, and New Zealand. At the state level, Louisiana and other southern states had lower levels of trust than New Hampshire, Iowa, Utah, or Wisconsin. The lowest of the states, Mississippi, had less than 20% of people trusting others. The researchers comment that: “imagine what that must mean for the quality of everyday life – the interactions between people at work, on the street, in shops, in schools.” 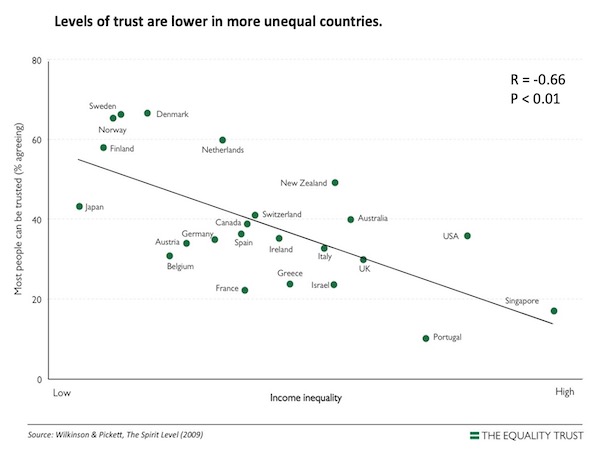 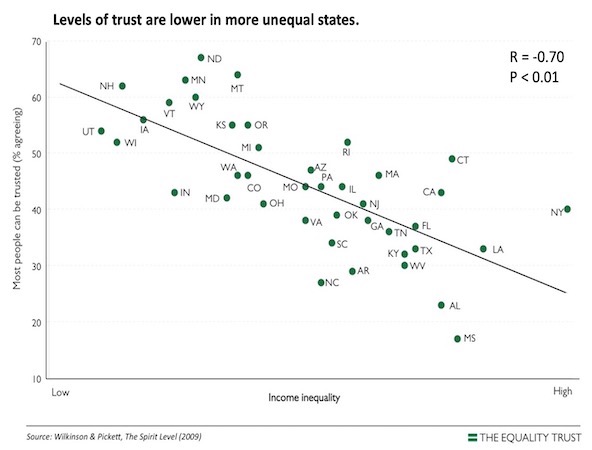 So what does trust have to do with climate change? First, while the majority of the public is alarmed or concerned about climate change, lack of trust affects public acceptance of our climate reality and public pressure for climate solutions now. As noted by historian of science Naomi Oreskes, the disinformation by the fossil fuel industry has been rampant. For the last fifty years, climate scientists (including my own grandfather, Roger Revelle) and other environmental scientists have been impugned .A recent book by Katie Worth (2021), Miseducation: How climate change is taught in America, documents the disinformation campaign by the fossil fuel industry and libertarian think tanks to teach climate denial to our children. Over one-third of children in the United States believe that climate change is not man-made, and one-fourth under the age of 18 decline to call climate change an “emergency,” a rate higher than that of Canadians, Mexicans, or Europeans.

Second, trust facilitates civic participation and a concern for others, both necessary components for collective climate action. The climate crisis is commonly referred to as a collective action problem, where there may be conflict between the group interest and the individual interest. Yet climate action must be collective to be effective. Climate action at scale requires civic participation to pressure politicians and businesses to change and meaningful carbon reductions by a majority of individuals. However, even the willingness to engage in individual pro-climate behaviors depends on an expectation that others will do the same.

Unfortunately, civic participation, like trust, is also negatively correlated with income inequality, as shown by Wilkinson and Pickett in their 2019 book, The Inner Level in a comparison of European countries. And concern for others is also affected. Wilkinson and Picket cite research showing that rich and poor people alike in more unequal societies were significantly less willing to help each other -- specifically, less willing to help old people, the sick and disabled, immigrants, and even neighbors.

So what can we do about loss of trust and climate change? I’d suggest four efforts:

1)    Join bipartisan efforts to tackle climate change. I am proud to say that I am a member of the bipartisan nonprofit group Citizens Climate Lobby. With people of all ages and 580 chapters in the United States and worldwide, the group is respectful towards liberals, moderates, and conservatives alike, and supports bipartisan solutions.

2)    Recognize that climate solutions in and of themselves can help to address inequality. That’s what climate justice is all about. For example, planting trees in vulnerable urban neighborhoods that historically have had fewer trees than wealthier areas can simultaneously reduce the urban heat island effect, improve air quality, and increase home values. Although I believe climate solutions need to be available everywhere in this country to accelerate the transition to clean energy, where and when possible, climate solutions should target those areas and people hit hardest by climate change and most vulnerable to its effects.

3)    Talk about climate change solutions with everyone that you can. Talk to your family, friends, neighbors, and even strangers. This simple action reinforces the social norm that taking responsible climate action is good. It also helps to counter acceptance of disinformation. I am trying this myself. I thought it would be difficult to talk about climate change with others, but I was wrong. I find that it gets easier and easier to slip a comment about a climate solution into a conversation. For example, if friends complain about high gas prices, one can share the pain and then say that you’re looking at electric vehicles now yourself. Or talk about swapping out a gas stove for an electric one. Or express interest in trying the new plant-based filet mignons recently advertised.

4)    Support funding by federal and state governments to provide accurate climate science and solutions to educators.Dr. Eugene Cordero, one of our Advisors, has documented the impact of education on carbon reduction based on his own successful classes, and has projected the global impact that education could have on the problem if applied at scale. Lots of good resources are available. Here at the Center for Behavior and Climate, we offer free climate science and solutions courses for middle-to-high school educators and individual learners. Unique among other resources, our seven courses require only one class period each and include energy, regenerative agriculture, and the impact of climate change on oceans, among others. Teachers can mix-and-match and choose how they want to incorporate climate science and solutions into their classroom. Six of the courses were created in collaboration with the YouTube Channel Just Have a Think; our most recent course on climate solutions was based on Project Drawdown’s ClimateSolutions101. You can check out our free courses here, and lesson plans are available here.

These actions can help to overcome mistrust while simultaneously advancing equality and our climate goals. More broadly, all of us need to re-enter the community sphere post-covid19, going to parades, fairs, movie theaters, civic organizations, town/city meetings, etc. In the process, perhaps, more of us will realize that we are more alike than dissimilar, and that we are all in this together.

The opinions represented here reflect the personal opinions of the author.