Is Individual and Collective Climate Action Essential or a Deflection of Meaningful Change? 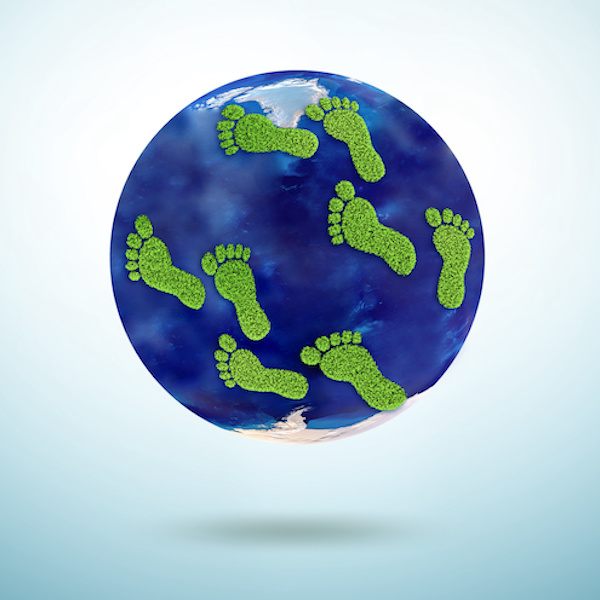 Who is responsible for cutting our carbon emissions to reduce the threat from our climate emergency? You? Me? Governments? Companies? Or everyone?

In the 1970's, an emotional and award-winning ad campaign to stop littering featured a Native American man shedding a tear over bottles of plastic trash thrown from a moving car alongside a forested road. The tag line was, "“People Start Pollution. People can stop it.”  Not many knew that the ad, created by the nonprofit, Keep America Beautiful,  was funded by global beverage and packaging companies who had created the trash in the first place. The corporate-sponsored nonprofit opposed bottle bills which would have made a scalable impact on trash reduction (Williams, 1994).

Similarly, in 2004, British Petroleum (BP) undertook an ad campaign to get individuals to focus on their own carbon footprint (Kaufman, 2020). The carbon footprint ad campaign was part of BP's broader ad campaign called “beyond petroleum.” Since that time, BP, along with the other fossil fuel companies have quietly funded social media and trade groups that were opposing any action on climate change, while expanding oil exploration.  “I guess, looking at it now, ‘beyond petroleum’ is just advertising,” wrote the ad creator, John Kenny in a 2006 New York Times Op-Ed.  “It’s become mere marketing — perhaps it always was — instead of a genuine attempt to engage the public in the debate or a corporate rallying cry to change the paradigm.”

Based on these types of deceptions, some argue that this effort by individuals should therefore be rejected.

First, hope and a sense of response efficacy (the belief that one can actually do something) are "strongly correlated with a willingness to engage in pro-environmental policies and to support climate change policies," notes Lorenzoni et al. (2007).  A 2019 AP-NORC poll asking just that question to Americans showed that the majority of those polled (60-64%; grey bars) felt that the federal government, corporations, and other developed countries had the greatest responsibility, but still 50% felt that individuals bore responsibility as well. However, those who felt their own actions had an effect on climate change (orange bars) had a 40% greater response towards all actors playing a role than those who felt their own actions didn't matter (blue bars). 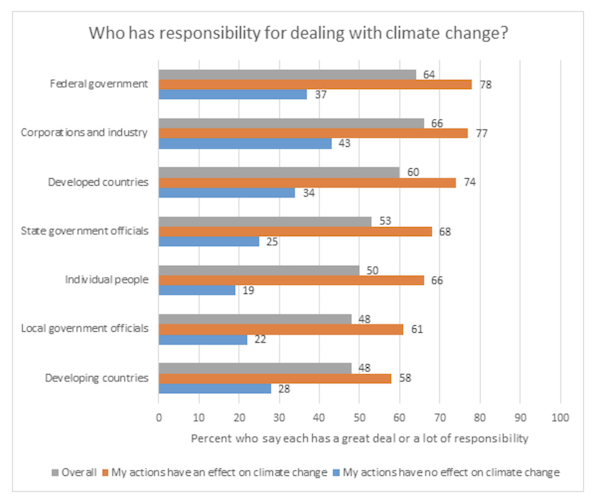 Second, "not feeling in control or effective makes us feel bad," writes Weber, 2015 (citing Rodin and Langer, 1977).  Norgaard (2011) states that 'feelings of hopelessness and inefficacy related to climate change are linked with a tendency to ignore the problem or to rationalize inaction." The tendency to inaction by those who think their actions don't matter is reflected in the blue bars on the AP-NORC graph above.

Third, while system and structural changes are needed to significantly reduce carbon emissions, social change movements have long depended upon a groundswell of public support to effect sweeping social change: including the civil rights movement, the environmental movement, the suffragette movement for women's' right to vote, and gay rights.

Fourth, response efficacy and social norms are the strongest influencing factors for public action, actions such as contacting government officials, voting, volunteering, donating, or protesting. These two variables explain 36-64% of the variance of public action, which is considerable (Doherty and Webler, 2016).

Fifth, individual and collective actions make a difference. As in the glass half-full/glass half-empty argument, some may look at the CO2 reductions obtained as a result of the Covid-19 pandemic as reflecting how little change individuals can exert on the system. I view it the opposite way. Despite a near shutdown of economies worldwide due to Covid-19 for a few months, LeQuéré et al. (2020) reported a reduction in CO2 emissions from March to May, 2020 on the order of 17%, and projected an annual reduction of 4-7% for the year. Given that the change primarily affected transportation and consumption choices, the paper shows how much impact, collectively, individuals have on carbon emissions!

Just as in the Dr. Seuss book, Horton Hears a Who, we need everyone, no matter how small, to act to solve our climate emergency. We need individuals, groups, governmental policy changes - both carrots (incentives) and sticks (regulations), innovation, and the private sector. It is encouraging that today, the Washington Post reported that a hedge fund forced two independent directors onto the Board of Exxon to enact climate action more quickly as a profit imperative.

P.S. One valuable thing that all of us can do is to simply talk about climate change and climate solutions. In particular, talk with your friends, family, and those who disagree. On Sat. and Sunday, June 12-13, the nonpartisan, nonprofit group America Talks is sponsoring conversations across the partisan divide. Sign up for a chance to spend one hour talking to someone who differs from you!