Welcome to the Climate Corner! Please note that you can check out all previous 17 issues in our Climate News Archives here.

Opting Into Climate Action Instead of COP-Ping Out 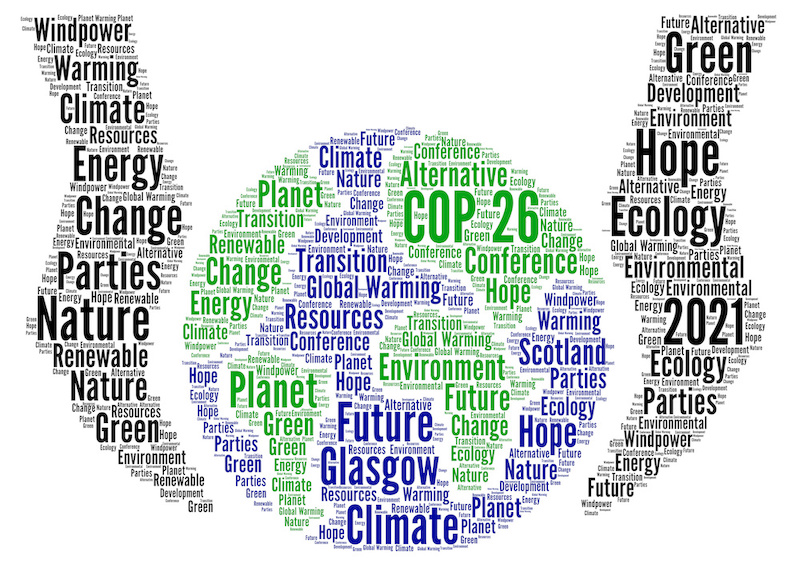 One of the most anticipated climate conferences will take place during the first two weeks of November. The 26th UN Climate Change Conference of the Parties (COP26) will bring together policymakers, practitioners, and citizens to accelerate action on climate change. This year’s conference is particularly important. COP26 attempts to solidify the commitments needed to achieve urgent and immediate action, as described in the Intergovernmental Panel on Climate Change’s (IPCC) most recent report.

How did we get here?

Much of COP26’s agenda follows commitments made during a previous conference (COP21 in 2015), from which the Paris Agreement emerged. The Paris Agreement was lauded as a landmark victory by climate advocates. 196 countries made public commitments to collectively limit warming to 1.5°C by the end of the century. This goal would be accomplished by signatory nations drastically reducing their emissions and creating solutions to adapt to the burgeoning effects of climate change. The voluntary commitments comprise each country’s Nationally Determined Contribution (NDC), subject to updates on a five-year cycle.

Although the Paris Agreement was designed to promote change, two recent UN reports note that we are off-track to meet its primary goal, as countries' current NDCs are inadequate to meet the Paris Agreement's target. While countries have begun to submit updated NDCs in advance of COP26, many countries have not yet complied, and some have even submitted NDCs that are less ambitious than their original plans. We’re currently moving in the wrong direction. To move forward, we must collectively change our behavior to achieve systemic societal change.

The goal of COP26 is to realign global priorities to keep commitments surrounding the Paris Agreement appropriate to our climate challenge; notably, to limit a rise in global temperatures and prevent the most catastrophic effects of climate change. Calls for more ambitious action have been increasingly evident in recent weeks.

What does COP26 hope to accomplish?

The goals for COP26 require that we must change our behavior at a scale that reduces greenhouse gas emissions and helps us adapt to the effects of climate change. Unfortunately, many interventions fail to properly apply behavioral science principles. Behavior change is often implicitly assumed; for example, assuming that climate-friendly products or services will be used as soon as they are available or at the right price, or that policy incentives will lead to climate-friendly changes by governments or companies. However, merely creating products, services, or policies does not ensure that they will be used at the scale required in this critical decade for climate action. Behavioral science can help to bridge the gap by identifying the barriers holding us back from collective and institutional action.

If we know what to do, why aren’t we doing it?

There is broad consensus that human behavior has caused climate change. It follows that our behavior can also mitigate climate change. When it comes to solutions that we know can make a difference – such as eating plant-based diets; driving electric vehicles; using renewable energy, or composting– why then aren’t we adopting them? At a basic level, there is a disconnect between knowing what needs to happen to tackle climate change, and actually doing it. This is often referred to as the intention-action gap. We have great intentions -- New Year’s resolutions are a prime example of the good behaviors we all try to adopt. I may intend to eat well and exercise often; unfortunately, these intentions often don’t stop me from indulging in an extra slice of cheesecake or sleeping through a scheduled workout! Climate change is no different -- good intentions alone won’t suffice. The other side of the coin is turning ambition into action. This is also where behavioral science comes into play.

How can behavioral science principles help us progress towards climate targets?

There are at least three ways that behavioral science can help to support climate actions.  It can help explain how to change behavior at a community level; understand the cognitive biases and mental shortcuts that contribute to inaction; and provide insight into strategies for public action that promote change.

All of us--policymakers, the private sector, and individuals--have a part to play in accelerating climate action. By leveraging behavioral insights, we can create better policies, programs, and habits to follow-through on climate pledges. An increasing number of people are standing up for climate action. Will you?

P.S. Join us at our upcoming workshop with Executive Director Bob Inglis of RepublicEN on How to Get Conservatives and Liberals to Act on Monday, Nov. 8th at the BECC Conference (Behavior, Energy, and Climate Change).  Register for the conference here!

P.P.S. We are excited to announce our new FREE short course on Energy, in collaboration with the YouTube Channel Just Have a Think. Register here!