Interested in our previous 27 issues? Check out CBC's Archives here.

You Can Help Combat Climate Disinformation 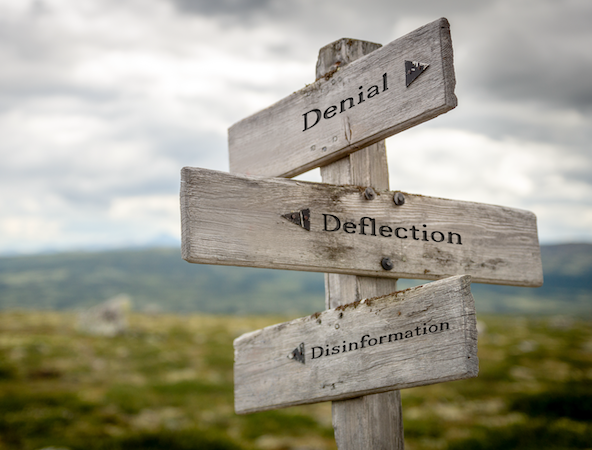 Climate change has taken on political dimensions. That's odd because I don't see people choosing sides over E=mc2 or other fundamental facts of science.

It has been 65 years since Revelle and Suess wrote in 1957 about 'the question of an increase of atmospheric CO2 during the past decades," and 66 years since Charles David Keeling started measuring CO2 concentrations in Hawaii. Revelle and Suess couldn't have stated the problem more clearly: the biogeochemical cycle of carbon had been altered, which meant that the concentration of CO2 in the atmosphere and oceans would increase. "Within a few centuries we are returning to the atmosphere and oceans the concentrated organic carbon stored in sedimentary rocks over hundreds of millions of years." The authors determined that the ocean's absorption ability was more limited than previously thought, meaning that the atmosphere would bear the brunt of the increase in CO2. The increasing CO2 in our atmosphere acts as a blanket for the Earth, increasing global air temperatures.

However, the world failed to act decisively in the decades after these discoveries and measurements, when it would have been easier and cheaper to do so. As described by historian of science Naomi Oreskes in Merchants of Doubt, a handful of' conservative Cold-War physicists aided the fossil fuel industry in fostering doubt and disinformation about the science of climate change.

Where do we stand on climate action now, 60 years later? We are roughly one month away from COP27, the 27th international UN Climate Change Conference of the Parties, which works to reach the goals of the Paris Agreement and the UN Framework Convention on Climate Change. This year, the U.S. finally acted in an ambitious way, passing the Inflation Reduction Act, with considerable funds dedicated to providing incentives for people to buy electric cars, heat pumps, and solar panels. The bill shows that the U.S. is serious in making a difference which can help galvanize other countries to act.  And recently, the U.S. Senate ratified the global Kigali Amendment that will help phase out hydrofluorocarbons (HFCs) that are even more potent greenhouse gases than CO2, and should lower global temperature by 0.5 degrees by the end of the century.

Unfortunately, the disinformation campaign from conservative think tanks, bloggers, and the fossil fuel industry continues. In 2021, Coan et al. conducted a computer-assisted classification study of disinformation claims. As shown below, the researchers found that from 2000 to 2020, the type of disinformation claim changed. While the initial predominant claim from conservative think tanks (CTT) was that "the science was unreliable", the predominant claim from about 2007 on to now is that "solutions won't work." Coan et al. show that this messaging increased over time in alignment with efforts to pass various climate policy bills. The second most common claim from the think tanks is that "the science is unreliable." The top claim for conservative bloggers meanwhile continues to be that "the science is unreliable." 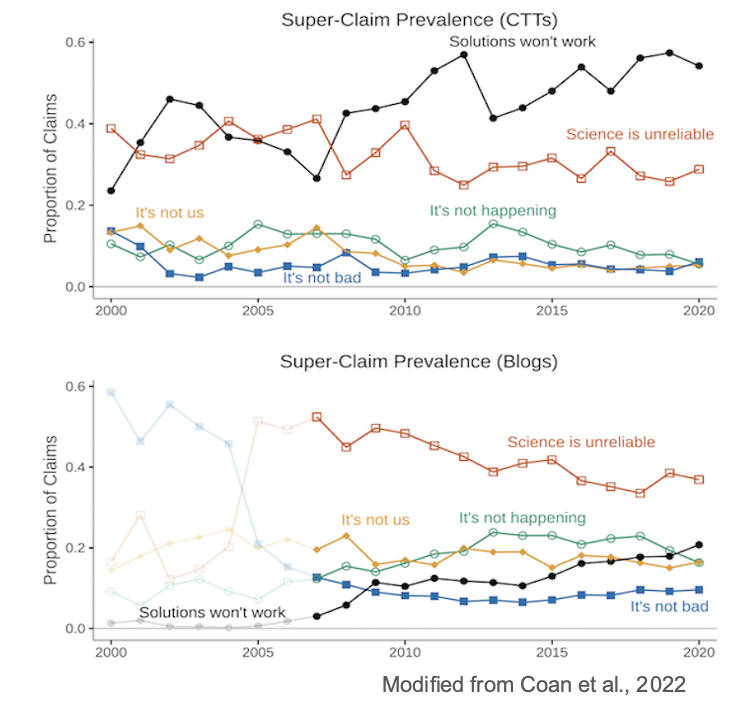 None of this is true. Solutions will work. Will some solutions not work as well as envisioned? Perhaps. Then we try others or tweak the solution. The science is reliable. 97% of published scientific papers agree that global warming is happening and is human-caused (Cook et al., 2013). Will some localized results shift and be more nuanced as we gain even more understanding? Of course. That is the nature of science.

Here's what you can do to turn the tide of disinformation:

1. Talk to others. The majority of Americans believe in climate change, believe that there is scientific consensus on climate change, and support climate policies (Mildenberger and Tingley, 2017, Sparkman et al. 2022). However, most Americans wrongly underestimate majority support by nearly half. The shared misperception of how others think or behave is called pluralistic ignorance. We can reduce pluralistic ignorance by talking about climate change and conveying popular majority support. Van der Linden et al. (2018) showed that by simply using a descriptive norm to tell others that "97% of climate scientists have concluded that human-caused warming is happening," both liberals and conservatives alike altered their perception of the state of scientific agreement on climate change.

2. Gain experience in recognizing disinformation when you see it. Roozenbeek et al. (2022) showed that watching short videos on disinformation techniques such as false dichotomies, scapegoating, ad hominem attacks, and emotionally manipulative language can improve people's ability to recognize disinformation when it is encountered. A handy app in this regard is Cranky Uncle by Dr. John Cook.

3. Speak out in favor of climate policies. By doing so, you  help increase the support of climate policies in your region and beyond. Ban Rohring (2020) showed that increasing perceptions of regional social consensus in particular enhances climate policy support. As we head into COP27, increasing climate policies worldwide is critical. Scientists have recently shown that several tipping points are more likely at the 2-3 degree Celsius of warming expected based on current policy efforts. Now is the time for public support and pressure for additional global policies and practices.

P.S. One month to go before the Nov. 1st deadline of our Behavior Change for Climate Action Challenge. Request an application by emailing caroly@bds.com. The application is just 3 pages. We are open to nonprofits working in any of the following climate areas applying for these funds. Areas can include, but are not limited to: energy conservation, public action (e.g., policy support, volunteering, protesting, voting for politicians supporting climate action), food choices, tree planting, soil restoration, blue carbon restoration, renewable energy, and electrification of cars, trucks, buses. CBC will select 3 nonprofits for this challenge. Each of the selected nonprofits will receive:

1) free technical assistance to learn how to apply behavior change for climate action from the CBC (workshop and continued technical support);

2) $4650 in funds to apply behavior change to an existing or new climate action project.